Mind Reading via the Florida CRC

Every twenty years, a Constitution Revision Commission (CRC) convenes to examine the Florida Constitution, hold public hearings, and come up with a list of potential amendments that will appear on the ballot. That time is now. As a result, Floridians of every stripe have together submitted over 2000 proposals to the CRC. This presents a remarkable opportunity to peek into the hearts and minds of the people of Florida.

Mosey on over to the Florida Constitution Revision Commission's website and check out the proposals submitted by members of the public. Loyal Millett would like to see billboards constitutionally banned in Florida. Loyal submitted 126 proposals to the Commission - by far the most prolific submitter. Jesse Dieterle only submitted one, but it was a doozy. He wants the Florida Constitution to state that no law shall be passed by the Congress of this State inconsistent with the will of God, as revealed in the Holy Scriptures. If you believe in God's omnipotence, then I suppose nothing happens that is not the will of God, so this might be a slam dunk. On the other hand, attempting to implement such a provision is more likely to result in a never-ending, unresolvable argument. Deborah Steele and a few others are looking for grandparent rights.  Deborah feels that grandparents should be allowed visitation with their grandchildren at least once a month and allowed to participate in their school events. It's not clear that any of these proposals belong in the State Constitution, but surely they reflect something of what is really irking Floridians.

Several months ago, I was moved to submit a proposal to the CRC, after reading that some on the Commission were already considering allowing public revenues to pay for religious institutions. This would give a constitutional basis for state funding of private religious schools. That got my blood boiling. I didn't feel compelled to organize resistance, but I did want to go on record in some small fashion.

Others have already started organizing around their particular issues. Floridians for Immigration Enforcement galvanized 586 people to request that employers be required to use Homeland Security's E-Verify system to ensure that new-hires are in the country legally. Evidently this is a hot button issue, making up over 25% of all submissions from the public.

There were a few submitters who questioned the legitimacy of the CRC. Paul Harvill was categorical and loud with his proposal, DO NOT MEDDLE WITH ALMOST the ENTIRE CONSTITUTION. Eugene LaCross stated that the CRC is without power to revise any Constitution and are impersonating Delegates chosen by the People. The Commission has not taken this to heart and has already proposed 103 amendments.

Public submissions are now closed, so what chance do any of these proposals have of getting into the Florida Constitution? I am happy to report that the CRC has responded to some of the public's suggestions.

Traci Deen submitted a proposal for the right to a clean and healthful environment. Commissioner Thurlow-Lippisch then took up this idea and submitted the unaltered proposal for consideration by the CRC. On the surface, that's awesome. 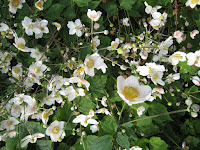 Florida's laws and regulations are stacked against those who might wish to push back against polluters. When a 45 foot sinkhole opened up last year at a Mosaic phosphate fertilizer facility and leaked millions of gallons of slightly radioactive water, it was unconscionable that both Mosaic and governmental authorities who were in-the-know withheld this information from the public for 3 weeks. If I lived nearby and drank from my well, it might have been useful to have constitutional backing to support my right to a clean and healthful environment. The amendment would allow anybody to enforce their constitutional environmental rights against any party, public or private. I don't claim to know how this might play out. Would we be inundated with lawsuits? Would a host of existing regulations have to be rewritten? Would polluting businesses pack up and leave the state? I have no idea. But I am pleased that a citizen submitted a well-intentioned environmental proposal to the CRC, and that Commissioner Thurlow-Lippisch is now championing that proposal.

There is still good reason for citizens to be wary of proposals from the CRC. Of its 37 members, most are political appointees. The proposals have been assigned to various committees. Proposals that make it out of committee and muster enough support from the Commission will make it on the ballot. Even if the Commission recommends a dreadful proposal, it still needs approval from 60% of the voters in order to pass. Citizen engagement with the Commission is our best hope for stopping any harmful proposals from the Commission. Citizens can contact individual Commissioners at any time to express concerns through the CRC website. I intend to keep a close watch on the CRC. I want to make sure they protect our civil liberties and public schools.

Feedback to the Commission aside, I do feel that this public airing of the public's grievances is an opportunity to discern what makes us tick. So I put my nose to the grindstone, determined to distinguish the pepper from the fly-specks of public submissions.

Many citizens expressed their wish to extend basic rights to more people based on such things as sex, sexual orientation, gender, gender identity, disability, age, and socioeconomic status. I found only two that resonated with Commissioners. Commissioner Roberto Martinez submitted Proposal 30, which extends protections to those with any disability. Proposal 3 addresses a clause added to the Constitution in 1926 aimed at keeping Asian farmers from leasing or owning land. This clause was never enforced, but is rightfully considered an embarrassment. Proposal 3 would remove this "alien land law". It is disappointing that more suggestions along these lines were not included in the Commissioner proposals.

Some used their proposal to provide brief history lessons. Here are a few examples -
I was enlightened by the unexpected history lessons provided by these passionate citizens.

Some proposals included unexpected personal information. One advocate for parental rights included 829 docket entries from a Court Records Search of his own divorce.

What I enjoyed the most was the out-of-the-box thinking dished out by some Floridians. Carlos Gamez wants to allow voters to call for a "Direct Veto" of any bill enacted by the Legislature. That would be a game-changer. Joe Hannousch would simply require that all elections be non-partisan. Would this mean that government would be non-partisan as well? Barac Wimberly would like more enforcement of illegal moving vehicle activity. He proposes a 50/50 sharing incentive of fines resulting from videos submitted by citizens. Who says the law can't keep up with technology? David Hubert wants austere term limits, such that every five years, we would elect a whole new government. There would be no more campaigning for re-election while in office. Although many proposals were word-for-word copies of other proposals, there were quite a few original ideas in the mix.

Most of the proposals put forward would probably better be served by legislation than constitutional changes. For example, one of the more important issues of our time - getting Big Money out of politics - was advocated in 460 proposals. They all proposed language that would request action by the Legislature -


... the People of Florida urge the legislature to use all appropriate and lawful authority to advance and expedite the passage and ratification of an amendment to the United States Constitution to make clear that unlimited political contributions and expenditures to influence elections is not free speech.

Legislators please take note: 460 out of 2012 written proposals would like you to advance an amendment to the U.S. Constitution to effectively reverse the Citizens United Supreme Court decision. Your constituents have a lot of other ideas as well. You can find them at the Florida Constitution Revision website. And, legislators, if you keep ignoring them, these ideas may end up in Florida's Constitution, right alongside the pregnant pig amendment.