Folks came out to rally against police brutality in Sarasota, Florida. I have not seen the police report, but the arrest of Chad Washington three days earlier brings up questions that demand answers.

You know those public hearings that various commissions hold, when they are required to obtain citizen input or expertise? It sounds boring, but that's called democracy in action, right? At the municipal level, that might mean fifty people coming up to the microphone to deliver their three minutes of articulate oratory on whatever subject has rumpled their dumpling. But at the state level that might mean several thousand people ready to sound off. And yet, yesterday, three companions and I trudged up to St. Petersburg to sit through just such a hearing. And I came away hopeful.

The Florida Constitution Revision Commission (CRC) is convened once every 20 years to propose amendments to the Florida Constitution. The amendments that the Commission approves will go directly on the November 2018 ballot. Here is my review of some of the public's suggestions. It would be fair to say that, thus far, the Commission has been stunningly dismissive of the voice of the people. According to the League of Women Voters, only 6 of the public's 2200 proposals were even considered by the Commission. So my expectations going in to yesterday's hearing were right down at ground level slithering alongside some snakes and worms. 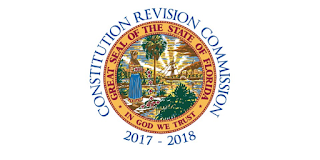 I had two objectives in mind, when I decided to attend this sixth of six public hearings to be held by the CRC in 2018. First, I was curious how the Parkland, Florida families, who had lost beloved friends and family during the recent gun massacre, might try to use this forum. There were no gun reform proposals under consideration, but that might fuel some disruptive impulses. Second, very few of the 36 proposals left standing at this point deserve to go on my ballot. Most did not belong in the Constitution. And a good chunk of them were aimed squarely at stripping away Floridian's constitutional protections. I wanted to hear my fellow citizens give this Commission an earful. Although there was an element of tilting at windmills, I too wanted to have my say.


We arrived very early in order to assure that we would be able to speak. It was first come, first to speak. While waiting in line for the doors to open, I noticed a woman in a bright pink Planned Parenthood shirt. I thought she might be misinformed. Proposal 22, seeking to downgrade privacy protections, had already been tabled. It was no longer up for consideration. A woman's right to abortion was secure under the Florida Constitution's privacy provision. As fate would have it, in a room of 1000 chairs, we ended up sitting next to the woman in the pink Planned Parenthood shirt. Several other Planned Parenthood supporters were sitting next to her. I asked them how the CRC process could allow proposals that had been tabled to move forward. After a quick search, we found the fourteen page document that outlines the rules of the 2017-2108 Florida CRC. Proposals could be made, debated, amended, postponed, reconsidered, withdrawn, tabled, approved, and so on. But in the end, there did not seem to be anything in the Rules Document to prohibit the full Commission from voting on a tabled proposal that had previously been voted down in committee. Upon first glance, their concerns seemed legitimate.

Still I was not convinced. But then the rules got even stranger. Carol, one of my fellow Sarasotans who had made this journey to St. Pete, had attended the press conference just prior to the hearing. She learned that Proposal 3 had been amended to include a ban on assault weapons.  A ban on assault weapons !!!  Carol and I were both thinking we might use a portion of our 2 minutes to ask the Commission to approve Proposal 3, if indeed it banned assault weapons. I looked up Proposal 3 on the CRC website. It would remove an obscure provision in the Constitution that theoretically prevented foreigners who were ineligible for citizenship from owning real property. It was part of Florida's racist past, directed at Asian farmers. It had never been enforced, but neither had it been repealed. And so Proposal 3 was an effort to repeal this racist provision. The proposal had been voted on by the Declaration of Rights Committee on November 29, 2017, and it had been placed on the Calendar for a 2nd reading two days later. There were no subsequent listings in its history. The Parkland shooting had occurred two months later. So, why would a proposal finalized two months before the shooting include a ban on assault weapons? Further snooping with Google search revealed a version of Proposal 3 that did indeed include a ban on assault weapons, but it was dated March 12, 2018.  This version of Proposal 3 deleted everything that had originally been in the proposal and replaced it with an entirely new version. No committees had met where amendments might have been debated, so how had this proposal been amended? Evidently the rules about amending proposals did not prohibit proposal amendments, even after the committees had finished debating, amending, and voting.

To recap, the hearing hadn't even started and I had learned that the rules of the CRC might permit proposals to be put to a vote by the full Commission, even if they had been rejected in committee and/or entirely replaced with new language. In other words, anything could end up on the ballot. This was highly unsettling. 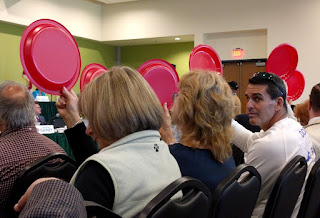 And then the hearing started. Each speaker had two minutes at the microphone. Everybody else was to be quiet. No signs were allowed other than red and green cards to indicate one's agreement or disagreement with a particular speaker. I hadn't brought red and green cards. But if this was to be an interactive hearing, I wanted some. One of my well-prepared Planned Parenthood neighbors shared some cards with us. The starting gun sounded.  And the marathon was on. A sloooooow marathon. An hour went by. At two minutes per person, that meant that about 25 people had spoken. I had used my green card over and over again and my red card a few times as well. In all that time, only one person had advocated a proposal that would ban assault weapons. He had referred to some series of numbers - 615688 - and hadn't said Proposal 3 in those exact words. But he did mention Parkland. The audience, who had sat silently watching every previous speaker, all stood up and applauded as he returned to his seat.

Another hour of speakers went by. Finally they called my name. I asked the Commission to approve Proposal 91 that would ban coastal oil and gas drilling within the territorial waters of Florida. There were lots of green cards in support. I sat down, and Barbara, another of my fellow Sarasotans, approached the microphone to ask the Commission to deny Proposal 4, an attempt to allow state funding of religion and religious institutions. Go Barbara! Lots of green cards. Carol would have to wait through another 50 speakers to get her turn to speak. That would be another two hours. We decided this would be a good time to grab lunch. 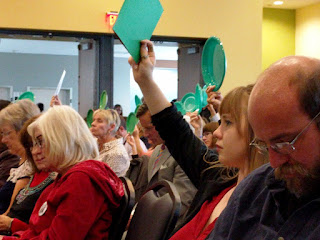 During the first few hours, the issue that had come up the most was gambling on greyhound races. With issues such as abortion, separation of church and state, crime victim rights, and public education on the docket, I was surprised that what brought the most people out was greyhound racing. Every time a speaker spoke out in support of Proposal 67, about three dozen green cards went up in the crowd. The impassioned participants spoke of the drug doping that had been measured in dogs. Of dogs that raced with a broken leg. Of the dogs' confinement in small cages. Others spoke of diminishing revenues. When we returned from lunch, the opposition contingent had piled in and were sitting and standing at the back of the room. When one of the many people who derived their livelihoods from greyhound racing took the microphone a couple dozen of them would raise their Truth signs.

Finally, the Commission was calling the Parkland families up to the microphone. They consistently called on the Commission to approve the amendment to Proposal 3 that included a ban on assault style weapons, bump stocks, and large capacity magazines. They wanted to raise the minimum age for gun ownership to 21. And they wanted to increase the waiting period for buying guns from 3 days to 10 days. By this time I had found the various amendments that had been submitted for Proposal 3. The Parkland families were advocating for the most recent one. This amendment had been introduced on the very morning of the hearing. This was breaking news. And as far as I could tell, there were no rules prohibiting such a last minute change to an entire proposal. Ordinarily I would criticize such a loosey-goosey scheme.  It could potentially be very corrupt, non-transparent, and non-responsive to the public. But in this case, the system responded to the very real and strong public pressure for stronger gun regulation. I did not witness any Commissioners respond to members of the public, but evidently while we were out, Commissioner Frank Kruppenbacher rose and addressed the residents of Parkland who were in attendance. He said "In my heart I know the majority of this commission stands with you, and we will do what’s right."

After another hour of speakers, the Commission called on Carol. She spoke against those proposals that would be bad for Florida's public schools. And she spoke in favor of the amendment to ban assault weapons. When she was done, there were still 200 people waiting to speak, but it was time for us to make our way home. The hearing had started at 1pm and it ended at 11:30pm. The Commission listened to some 10 hours of public comments during this one hearing alone. All told, 430 people addressed the Commission. That represents an awesome outpouring of in-person citizen feedback.


My divination abilities are not well-honed. Will 60% of the full Commission vote to put a constitutional ballot amendment banning assault weapons on the ballot? If so, would 60% of Florida voters vote in favor? Will the National Rifle Association (NRA) swoop in with PR finesse and strong financial backing to sway these votes? For all I know, yesterday's CRC hearing might have been an historic turning point, where we start to see passage of common sense gun reform. Who am I to know? In order to keep a shred of hope, I leave it to others to explore how much direct and indirect funding each CRC Commissioner has already received from the NRA. But I am hopeful. So many citizens came out to make their voices heard, and by and large, I agreed with many of them.

Update: On March 21, a Commissioner raised a point of order that the gun reform introduced as an amendment to Proposal 3 was not relevant to Proposal 3 and should not be introduced.  The Chair ruled the amendment out of order.  Consequently, the full Commission will not have a chance to vote on an assault weapons ban.