Last October, I found out just how much the CEOs of large corporations make. The ratio of CEO pay to worker pay was 42 to 1 in 1980, with the average CEO making $1.6 million. Quite a disparity! According to the Institute for Policy Studies, in 2010, the ratio had skyrocketed to 325 to 1, with the average CEO making $10.8 million. I thought "Let's fix that!" But as it turns out, as economic inequality increases, the wealthy use their wealth to corrupt our politicians and government institutions. In other words, it is less and less likely that everyday citizens will be able to bring down CEO pay legislatively.

At the macro level, Richard Wilkinson presents a wonderful TED talk that shows how economic inequality harms societies. At the micro level, in the U.S., full-time minimum-wage workers cannot support a family. The value of the minimum wage has fallen sharply over the past forty years. In 1968, the federal minimum wage was $1.60 per hour. Using the government's CPI inflation calculator, this translates to $10.57 in 2012 dollars. Yet the current federal minimum wage is only $7.25 per hour. I can spend a lot of time canoodling statistics about purchasing power, productivity and the like, but the bottom line is that the minimum wage is just too low!

Back in March, a friend of mine from high school days, Brad, suggested that implementing a living wage might be a practical way to address economic inquality. He gave me the heads up about Ben & Jerry's. They make ice cream and they are in the vanguard regarding economic justice. From their website

Every year, we recalculate the livable wage to make sure it’s keeping up with the actual cost of living in Vermont. In recent years, Ben & Jerry’s livable wage has been nearly twice the national minimum wage, landing at $15.97 in 2012.

Impressive. Ralph Nader was on board with Brad, suggesting much the same thing. In February, Nader said there would be no better time to enact a higher minimum wage than during an election year. On June 6, following up on Ralph Nader's idea, Representative Jesse Jackson Jr. (D-IL) introduced the Catching Up To 1968 Act of 2012. It calls for a raise in the federal minimum wage to $10 per hour, and then indexing it to the Consumer Price Index in subsequent years.

Where do Occupy participants stand on this? At a recent Tampa Bay Regional Gathering, I noticed a woman walking around with her bicycle helmet on. She was hovering near her bicycle. As an avid cyclist myself, I stopped and asked if she rode her bicycle all the time or just on that day. As it turned out, she rides everywhere, but not for the same reasons I do. I ride to reduce environmental strains on the planet and to stay in better shape. But Kimberly Cooper's original motivation was that her minimum-wage earnings were not keeping up with her cost of living. She took notice of this back in 1980, and has been riding ever since.

After hearing her out, I researched her facts. John Schmitt and Janelle Jones agree with her; wage inequality began to rise sharply in the United States in 1979. It's not just Kimberly, but the education level of minimum wage workers has risen dramatically since 1979. Kimberly spearheads the Moxxie Bike Club, a bike club for moxie women in St. Petersburg.

The voters of Florida have already spoken out on this issue. In 2004, they voted overwhelmingly (71%) to raise the state minimum wage above the federal minimum and to automatically index it to inflation. This, despite the fact that the opposition outspent supporters 2-to-1. The most recent economic research confirms the benefits of raising the minimum wage. Although it may not reach 99 percent, an increase in the minimum wage enjoys strong support across all demographic groups. 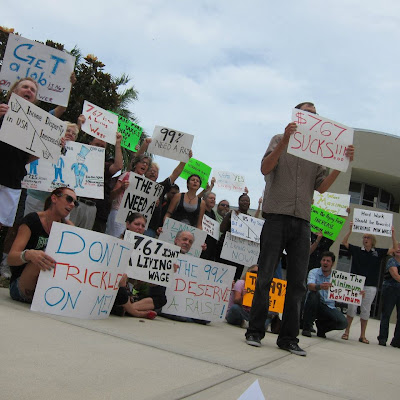 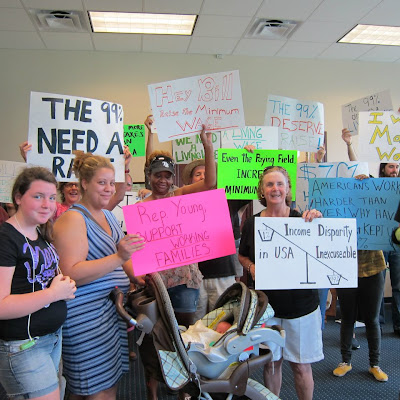