Hands Across The Sand, Lido Beach 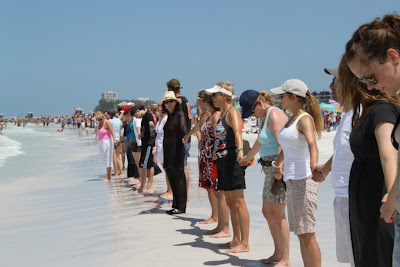 Concerns ranged from the health of the general ecosystem, to a reduction in tourism at Gulf beaches, to our societal dependence on oil, to the health of Gulf residents and fishers (somebody tell me if that's a word). Today, two years later, a few folks continued to speak out about why they were joining "Hands Across the Sand" at Lido Beach and embracing clean energy. Several were so dedicated that they interrupted their 40th Sarasota High School reunion to participate.

I was curious about the scientific assessment of the effects of the 2010 Gulf oil spill. We have a Mote Marine Laboratory intern staying with us who is part of a team that provides care for one Mote dolphin. In June, she let us know about Edna, who had stranded on Longboat Key, just north of us. Another team at Mote is treating Edna and nursing her back to health. As it turns out, since 2010, dolphins have been dying and/or stranding in record numbers in the Gulf of Mexico. A year ago, the National Oceanic and Atmospheric Administration (NOAA) tested 32 living dolphins in Barataria Bay, where the oil spill had a big impact. The dolphins were underweight, anemic, had low blood sugar, low levels of hormones that help with stress response - all symptoms that would be expected of dolphins exposed to an oil spill. However, the data is not as clear-cut as it first appears. The dolphin deaths started increasing about two months BEFORE the Gulf spill. A recent study published in PLoS One points to the combined traumas of a very cold winter in 2010, followed by massive amounts of oil and chemical dispersants due to the BP oil spill, followed by a large 2011 snowmelt which injected a huge volume of cold freshwater into the northern Gulf.

It may be difficult to pinpoint the cause of the dolphin die-off, but it seems that it is just as difficult to evaluate the decline in fish, shellfish, and coral. I was hoping it might be easier to identify the human cost and suffering resulting from the spill. People don't usually stay quiet about such things. Some experienced short term chemically induced illnesses, some of which were severe enough to land folks in the hospital. The National Institute of Environmental Health Sciences is studying the long-term effects such as cancer and birth defects. I hope they will be looking at the effects of eating seafood tainted by components from chemical dispersants and/or crude oil. We already know that eating some crude oil components causes cancer and developmental problems. We don't know much about the chemical dispersants. They have been shown to bioaccumulate. Might they move up the food chain from water to fish to people? Unfortunately, the study's late start and lack of baseline information may limit its ability to draw strong conclusions.

Why are we in such a state of ignorance? Based on the behavior of BP in trying to hide the extent of the spill and keep reporters away from the spill area, I am willing to hazard a guess. If there is a shocking lack of research into the long-term effects of an oil spill, that is, undoubtedly, just the way the oil industry wants it. Existing research results probably fall prey to legal settlements and non-disclosure agreements. This is all pure speculation on my part.

I am inspired that folks around the country have been protesting dirty power, including oil. Thousands marched in Washington D.C. against fracking. In West Virgina, a small group shut down a mountaintop coal removal operation. And a week ago, hundreds of people created a "human oil spill" in Burlington, Vermont. In Sarasota, across Florida, and around the globe, we held hands across the sand. 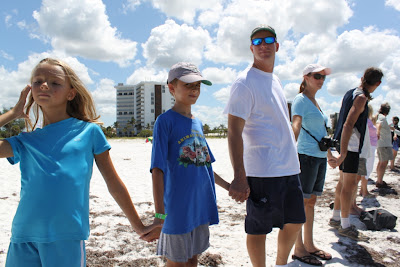 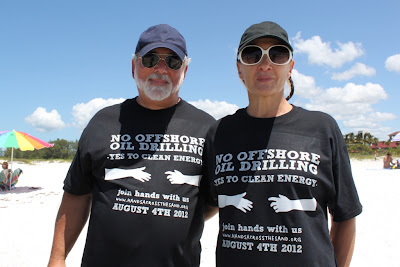 More Info:
America's Green Summer: From Vermont to Appalachia to Texas, Citizens Say No to Dirty Power, July 31, 2012,
Hands Across The Sand website,
Study Points to Causes of Dolphin Deaths in Gulf of Mexico, July 18, 2012,
'Frothy Gunk' From Deepwater Horizon Spill Harming Corals, March 26, 2012,
BP Oil Dispersant May Facilitate Skin Absorption Of Crude Oil,
"Making It Right" After BP Oil Disaster Is Up to Us - Not BP, April 20, 2012,
The Complexity of Human Health Impacts of the BP/Gulf Oil Spill, HJNO March/April 2012,