Voter Suppression at the RNC

I have very little interest in the political swaggering and enthusiastic parroting of emotion-laden slogans that I had thought formed the backbone of national political conventions. But since I've never really watched one or even watched part of one, I decided the time was ripe to find out if my uninformed views held water. The Republican National Convention came to Tampa and I was going to pay attention or nod off trying. On opening day, I got side-swiped by the story about the bus driver(s) who couldn't find the Convention Center, effectively hijacking the bus taking the delegate-riders on an unscheduled tour around Tampa. Meanwhile back at the Convention, the Rules Committee voted to let the (100) RNC committee men/women change the rules on the fly between conventions. There was an attempt to radically change the delegate selection process, but some sort of compromise passed. I should say that it sort-of passed. The no-votes sounded louder than the aye-votes, but no roll-call was taken. No matter. Now that the RNC can change the rules between conventions, they will have plenty of time to rewrite the rules to their liking. I don't know how to verify the juiciest part of this story, which is that the buses carrying the Florida and Virginia delegations, including Morton Blackwell, the most ardent foe of the Rules Committee change who had organized in opposition, was on one of the "lost" buses circling the Convention Center, being held "against his will", during the Rules Committee vote.

It is an improbable world we inhabit, that at times, seems more like spoof fiction than reality. Shortly after the rules-change power-play played out, a Rally Against Voter Suppression was scheduled at nearby Centennial Park. The Florida Consumer Action Network (FCAN) and Rainbow Push Coalition put together a march to push back against Republican efforts to disenfranchise communities of color. Delegate voter suppression was going on inside the RNC. But outside the RNC, folks were coming together to protest voter suppression. The contrast between what the people want and what our major political parties deliver was juxtaposed quite starkly.

Rachel Maddow put together a great chart showing how Florida's version of voter suppression laws had all but quashed new voter registrations for Democrats. 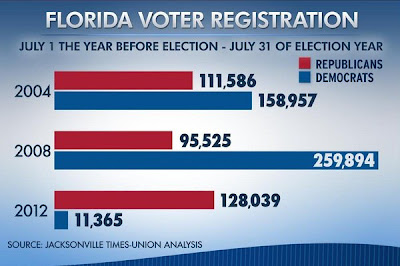 Thankfully, the courts are rolling back the more egregious voter suppression laws. But I'm especially appreciative of those who continue to speak out on this issue. Here's Reverend Charles McKenzie giving a rousing speech.

Quite frankly, the kinds of rule changes embraced during this RNC are what dissuade me from participating more in politics. RNC rules changes and delegate shifting continued after the "lost" bus incident. Ron Paul delegates from several states were unseated in favor of Romney delegates, despite objections from the floor. Ron Paul won the plurality of delegates in six states. By the incoming rules, he should have earned a spot on the nominating ballot, but the RNC decided to change the rules at the last minute to require an eight state plurality in order to be added to the ballot. These Ron Paul delegates were victims of voter suppression within their own party. I suppose this shouldn't surprise me. I continue to prefer an unsolvable issue to chew on or a boring policy wonk to political shenanigans. Unfortunately, my idealistic take on this does nothing to deter the undermining of democracy that is underway. So, in the name of pragmatism, I will go a little deeper. The larger and more powerful an organization, the more likely that survival instincts and power grabs will rule the day. The powerful RNC is a poster child for this tendency.