A Field Trip to Washington DC: People's Congress of Resistance

Currently, the United States Congress does not represent the people who live and work in their districts. To compensate, many people journeyed from around the country, gathering at Howard University in Washington DC, to do the job that the U.S. Congress is not doing. Congress takes $1.1 trillion in tax dollars and hands over half of it to the largest military-industrial complex in the world, while health, education, housing and jobs receive less than a quarter. Since January 20, people have been fighting back in huge numbers. Immigrants, women, scientists, students, and many others have rallied and marched. The People’s Congress of Resistance formed to help support and coordinate this ongoing and growing resistance. Representatives from 37 states and 159 cities participated.


On September 16, 2017, I arrived at the People's Congress of Resistance and sat down at a table with six people I did not know.  They readily welcomed me, and I slid into easy conversation with a math teacher from Baltimore. I wondered what type of organizing this teacher was doing back home. His response was unexpected - the Algebra Project. The Algebra Project was founded by Civil Rights leader, Dr. Robert Moses. It uses mathematics as an organizing tool to ensure quality public school education for every child in America. Who knew that math could be an organizing tool? 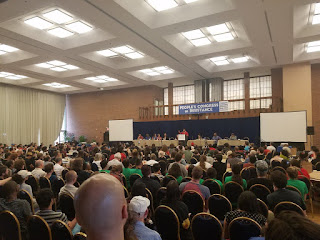 The introductory comments concerning principles and strategy for the People's Congress were eminently quotable. The clarion call was to "Turn our society for the few into a society for the many".
How about this one -
"When people consider themselves the protagonists of change, they are unstoppable." That came from Jang Jinsook who traveled halfway around the globe to be at the People's Congress. She represents the New People's Party of South Korea - a new political party seeking to eliminate inequality, create peace, and reunify the Korean peninsula. Rosa Clemente, a community organizer and 2008 Green Party Vice-Presidential candidate, got the crowd going with a takeoff on the school-to-prison pipeline, "How do we build a youth-to-movement pipeline?" By the end of the introductions, the participants were all charged up and ready to create some solid solidarity during the workshops.

I attended the media workshop, whose goal was to develop an independent, centralized media hub - one where we could control the narrative. Without such a hub, all of us are subject to the censoring and bias that operates in the corporate media. Such bias shuts out widespread exposure to the resistance that has erupted in every corner of the United States, since the Trump administration came to power. When Jared Ball, a professor of communication studies at Morgan State University, asked the packed assemblage how many considered themselves journalists, almost all hands shot up. Abby Martin, creator of The Empire Files, provided some great background statistics. Here are a couple. Over the last seven years, the number of journalists of color shrank by over 50%. Women write only 40% of stories about reproductive rights. I seemed to be the only one there who had never heard of The Empire Files, but Abby generated reverence and awe from the crowd. And like the previous presenters, she too was strikingly quotable. "Cops are more scared of cameras than guns." Then the attendees lined up to talk about what they are doing in their communities and what they could use from a centralized media hub. Jared Ball felt that if we want a society that places political and economic power in the hands of we-the-people, we need emancipatory journalism to disseminate the news. And he promised to follow up with those of us in attendance. 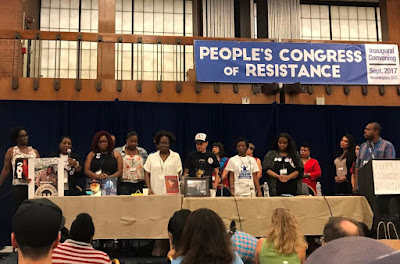 After a second workshop session and lunch, an emotionally wrenching group came to the podium to speak. They were mothers whose children had been senselessly murdered by police officers. The audience was spellbound. Several made the unthinkable, yet obvious, observation that their child was murdered due to the color of their skin. "Every 28 hours a person of color is being murdered. And the officers are not being held accountable." These women are dealing with the tragedy of their loss, an intimidating legal system, and the stone face of law enforcement. They have gotten no justice. The People's Congress of Resistance passed its first resolution defending victims of police terror. There was thundering affirmation.

There was too much going on to keep up with it all. I was tempted by the antiwar workshop with Joe Lombardo of the United National Antiwar Coalition. "They called it the War on Terror, which means it never ends. That's what they want - ongoing war." There was a foreign policy plenary and discussion. "Why is the narrative telling us that Puerto Rico, my homeland, is in crisis? No, the crisis is in colonialism and imperialism." There was an immigration/deportation discussion. "We demand FULL human rights for immigrants, period." There were breakout sessions about healthcare, freeing political prisoners, community organizing, the fight for housing, mutual aid, building community centers of struggle, and rural/small-town organizing. 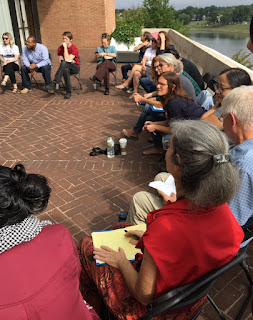 I attended a fascinating workshop led by Laura Hanna and Anne Larson of the Debt Collective. They had run out of meeting rooms, so we met outside and introduced ourselves. One man had $270,000 of student debt. Another had decided many years ago to stop paying off his student debt. Right now, a record number of people aren’t paying back their student loans. About 8 million borrowers have given up paying on more than $137 billion in education debts. This is an opportunity to engage in a debt strike and obtain debt relief, especially against the for-profit college loan industry. The Debt Collective has a successful record of doing this against Corinthian College. It is wrong that payday lenders earn high profits from poverty. And it is wrong that local court systems target poor people, disproportionately black and brown, and load them up with debt. A number of attendees were radicalized, when they worked in the debt collection industry. One participant suggested getting a public bank to buy up debt at pennies on the dollar and then forgive the debt. According to Laura Hanna, 98% of creditors don't have a clear chain of title showing that they own a debt, including most credit card debt. This presents yet another opportunity. Rather than leaving debtors to fend for themselves, the Debt Collective is creating an online platform for those with debt to leverage collective power, organize, and take direct action.

Activists from around the nation were drawn to the People's Congress of Resistance by its vision of a more just, equal, and sustainable society. The Trump regime is moving in the opposite direction, threatening to destroy decades of reform in the areas of civil rights, environmental care, public education, and labor rights. These reforms were achieved through enormous grassroots struggles. The People’s Congress of Resistance is a continuation of these struggles, advocating for radical change and building up the movement to realize its vision of a more equal and just society.