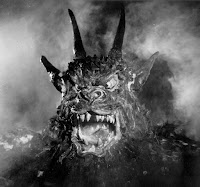 Demonizing groups of people seems to be part and parcel of our political process. In our two party dominated system, Republicans make Democrats out to be the villains, and Democrats make Republicans out to be the villains. This demonizing generally emerges in the form of one group blaming the other for the current, dreadful state of affairs. During most political races, this behavior devolves into mudslinging. Without being a student of political history, my guess is that it has always been so. I just read about the presidential campaign of 1828, during which Andrew Jackson and John Quincy Adams lashed out at each other mercilessly.

Presidents, as leading representatives of their party, are often the recipients of boatloads of blame. President Obama seems to have suffered a full-on attack of such blame-mongering, significantly more than any president in recent memory. Did you hear that the success of ISIS is totally President Obama's fault? How about the inadequate response to Hurricane Katrina. That was President Obama's fault as well. Never mind that he wasn't president then. And, apparently, Obamacare is destroying the U.S. health care system. If not, why has the House of Representatives tried to repeal it more than 60 times? And don't forget the ebola virus. Many critics attributed the 2014 ebola outbreak in West Africa to President Obama. A recent New York Times op-ed opined that the rising popularity of Donald Trump is part of President Obama's legacy. Thank you for a good guffaw. For some reason, politicians expect this kind of hogwash and seem to have such thick skin that all the blame slides off without causing damage. From where I sit, they look a bit super-human.

But the blaming and demonizing are all too human. As I watch the 2016 presidential election unfold, I am noticing that stereotyping, demonizing, and scapegoating are overlapping threads. These threads are woven into the very fabric of society. Until this election, I had thought that campaigns merely took advantage of the electorate's prejudices. For example, I remember in 2004,
Republicans in several states used same-sex marriage ballot initiatives to draw anti-gay bigots to the polls, in order to re-elect President Bush. As long as I can remember, many mainstream politicians have attacked immigrants in order to attract voters. Getting the electorate riled up based on their baser prejudices is a good Plan B, if a candidate's stand on the issues doesn't do the trick.

Let's look at Donald Trump, the 2016 presidential candidate and demonizer-in-chief. In his rhetoric, he marginalizes women. If he disagrees with a woman, he simply insults her appearance. Or her sexual history. When it comes to African Americans, Trump refused to condemn white supremacist, David Duke, who he had previously called a bigot and a racist. Incidents of racial violence have been recorded at Trump rallies, including one with Trump security looking the other way. Trump's supporters are also unabashed Jew-haters. He publicly mocked the movements of Serge Kovaleski, a journalist with mobility challenges. Trump's charged rhetoric against Muslims includes falsely accusing New Jersey Muslims of celebrating the 9/11 attacks. In these cases, Trump is leaning on existing stereotypes and blame-games. The fact that his popularity seems to surge after each new outburst of bigotry reflects poorly on voters.

Had the mainstream media looked at this man and realized that the people of the United States would not support him, they could have brushed him off as an inflammatory bully. Instead they looked to their news ratings and ran with a juicy story. And the story just got juicier as the candidate became more impolite and more flippant. As he let his rallies get more violent, the press paid more attention. Money can't buy that kind of exposure. But showmanship can. Showmanship can easily dominate our presidential campaigns due to the intense reliance on media exposure. The media favors style over substance. So does Donald Trump. The mainstream media doesn't give a hoot about issues. A little bit maybe, but not much. Donald Trump seems to be in the same boat. The media likes sound bites and slogans. Donald Trump will "Make America Great Again". But more than that, a demagogue willing to scapegoat others makes for good copy.

Donald Trump has gone beyond mirroring societal prejudices. He has invented new ones. In this election, I now realize that political campaigns can breed new forms of bigotry. When Trump first stated that Mexico was sending rapists over the border, I was jolted into re-evaluating the role of political campaigns. Just to share my initial response, I couldn't even make out what he was trying to say. Since almost half of all immigrants are women, why would any reasonably intelligent person try to connect immigrants as rapists. Once I rejected the notion of a flood of women rapists streaming across the Mexican border, I still wanted to wrap my mind around the idea of this newly fabricated stereotype. I am aware of several stereotypes about Latinas and Latinos, but they are not generally of a violent nature. And of course, the statistics report a contrary finding. First-generation immigrants have lower crime rates than native-born Americans. No matter. Trump's comments generated a flurry of media coverage. And his statements have been played and replayed, hashed and rehashed. I don't think the shock of his statement has worn off yet, even months later.

I had never considered that one strategy to help win a presidential campaign would be to invent a new prejudice. And yet it makes total sense. Isn't that what a good chunk of political campaigning is all about? Creating prejudices that support your own candidacy and leave your opponent smoldering among the embers after a forest fire?

Each presidential campaign generally creates a brand out of the-other-team-tanked-the-economy and I can fix it. This brand revolves around a set of biases and slogans. Bernie Sanders carries on about the billionaires and how they are cutting the floor from under the middle class. Donald Trump is one of those billionaires, but he claims that makes him incorruptible. Both Trump and Sanders call the rest of the candidates corrupt, due to the large corporate donations they have accepted. Ted Cruz only sees the corruption of those that offend God. And of course, Cruz feels that God is on his side, and that his chief rivals at this point - Clinton, Trump, and Sanders - all embody New York values. I think that's code for big-city Northeasterners. But then again, New York City is a city of immigrants and minorities, so maybe Cruz is trotting out the same old bias against immigrants and people of color.

All of these generalizations gloss over the specific circumstances. Or the generalizations are downright wrong. There's really no way you can correctly blame immigrants for tanking our economy. And yet, such claims win elections.

Now that I have re-cast a good chunk of political campaigning as a form of prejudice baiting, it is not much of a stretch to include prejudice creation. Trump is feeding off the resentment of many in the U.S. who have lost their jobs to the global production of goods and services and who also feel their politicians do not speak for them. If the pollsters have it right, these folks are largely rural, white, non-college-educated, Christian men. In these times of increasing heterogeneity and economic insecurity, there is an increasing desire to blame someone. When Trump announced his candidacy, he characterized Mexican immigrants as rapists. The response from his supporters must have been positive enough that he broadened his insults to include immigrants from the rest of Latin America. Evidently, any new prejudice that bears a faint relationship to the injustice of the new economic landscape is welcome. By demonizing other folks, even for a fabricated trait, Trump and his supporters can then classify themselves as winners.

As the 2016 presidential campaign continues, we see a growing embrace of Trump's message of demonization and blame. History is strewn with examples of demonization gone bad - of crowds erupting in mob violence. It may well be that haters gonna hate, but that does not mean that the rest of us should just sit around and watch.

I was filled with optimism, when I read about the actions of the Cumberland County Sheriff Earl Butler following a Trump rally last month. The Sheriff's Office has disciplined five deputies following an investigation arising from the assault of a protester at a March 9 rally. A Trump supporter had punched an anti-Trump protester, while he was being escorted out of the arena by deputies. What did the deputies do? They detained the victim and let the assailant walk back to his seat. They didn't even question the assailant. Three deputies have been demoted in rank and suspended for five days without pay for unsatisfactory performance and for failing to discharge the duties and policies of the Office of Sheriff. Two other deputies were suspended for three days for the same failures. Trump is an outspoken supporter of law enforcement, but that is no excuse for law enforcement to slack off its responsibilities at a Trump rally. Under Sheriff Butler's direction, law enforcement is getting in gear.

Just as important, the Sheriff reviewed evidence to determine whether to file charges against Trump himself, for inciting a riot. At a prior rally in Las Vegas, Trump had responded to a protester's interruption by saying he wanted to punch the man in the face. At another rally in Iowa, Trump promised to pay the legal fees of supporters who "knock the crap out" of protesters. A clear pattern has emerged. Although Sheriff Butler decided not to file charges, kudos to him for considering it. It's time for other law enforcement officers to step up to the plate.

Trump is tapping into the anger and resentment of many citizens. At his rallies, Trump fosters a hostile environment. He has called for violence against his critics. The media kicks it up a notch, catapulting his hate speech to the front page. Unfortunately, the Republican Party has not condemned Trump's insulting rhetoric. And law enforcement has not brought its full weight to bear. Many candidates feel they benefit from appealing to the prejudices of their voters. Trump has jumped on this dangerous, rotten train and revved up the engines, creating new prejudices and fostering hate as he barrels along.