There have been oodles of news reports from Occupations across the nation. From the smallest hamlet to the largest cosmopolitan venues, protesters have taken up residence in public spaces to let their grievances be known and to look for solutions. Local government response has been decidedly variable. Both citizen media and mainstream media have focused the majority of their attention on hostility, destruction and violence. However there is more under the hood. Some municipalities have responded positively. For instance, the powers that be in Miami, Florida have given Occupy Miami a permit to use the park by the Government Center rail station indefinitely. Occupy Miami calls their encampment Peace City. Open Letter News reports stories of local police bringing pizzas and a few even staying overnight in the camp. With a strong geographic foothold, they have set a goal of 99 actions in 99 places. So far I have been able to track down these actions: "Hip Hop & Rock Jam", "March on the Financial District", "Miami's 99% Take on Bank of America March", "Teach-In on U.S. War Policy and Profiteering", and an "Occupalooza" Concert. I haven't seen any numbers reported concerning account closures and openings as a result of Bank Transfer Day. But, a dedicated community group in San Jose, California, decided to take it to the next level. They approached the City Council to have them steer their funds away from banks with a poor record of modifying loans to stop preventable foreclosures. On October 25, they announced that the City of San Jose had diverted nearly $1 billion from Bank of America over the last year.
This action predated Occupy Wall Street. As did the call for Bank Transfer Day. However, it is a wonderful example of the power we have within our local communities. It is also an innovative approach that delivers a strong punch. It is very much like Occupy Wall Street. Many of the local Occupations must raise their own money, hire lawyers, make their own meals, make their own media, and handle internal security while trying to model an ideal society. In many locales, they are accomplishing this despite agents provocateurs, police harassment, and bad weather. Last week in New York City, the Fire and Police Departments confiscated Occupy Wall Street's generators, due to safety violations. Amazingly, within 48 hours, volunteers pedaling bicycles equipped with generators were providing electricity to the encampment. Their pedaling produces some of the electricity needed for their communications equipment, cell phones, lighting, and kitchen. 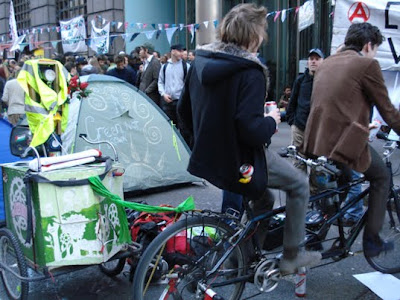 Update November 8:The Atlantic Wire reports that the New York Fire Department gave the generators back last week because they had no basis to confiscate them. May the Occupiers continue to pedal for their environmentally friendly electricity.
Another great project is a greywater system, which filters dirty water from the kitchen through wood chips and other materials. The resulting water benefits the plants in Zuccotti Park. A Sustainability Group has recently been formalized. It is looking into addressing winter's cold weather by developing non-toxic, reusable, homemade heat packs. As I hear about these innovations, I wonder why I haven't put together my own bicycle generator yet. Time to quick step my pedaling! Sources: Open Letter News, PICO National Network, Campus Progress, Inhabitat New York City, Atlantic Wire
at Monday, November 07, 2011