There are more people living in slavery now than at any time in human history. I learned this breathtaking statistic, while preparing for a Passover Seder about five years ago. For me, the release of Jews from their bondage in ancient Egypt is at the heart of Passover. Passover is, for me, a celebration of freedom. When I reported to my fellow Seder attendees that there are more slaves here in Florida than anywhere else in the country, I was met with utter disbelief.

The Museum of Modern-Day Slavery came to the Unitarian Universalist Church in Sarasota to increase awareness about the working conditions of farm workers in Florida. The Museum is a replica of a produce truck in which farm workers were kept locked. Inside, newspaper clippings tell the story of six federally prosecuted slavery cases involving over 1,000 Florida agricultural workers. Over the years, I remember reading about court victories over citrus grove owners who "hired" hundreds of workers and threatened them with death if they tried to leave. I read about those forced into sex work and farm labor. I did not have a sense of whether these instances were merely the tip of the iceberg or whether the authorities had stopped the bulk of the atrocities. More recently, I read about the Evans family, who recruited homeless citizens from shelters in the United States, assuring them jobs and housing. Instead, they were brought to labor camps, where exorbitant charges for food, rent, alcohol, and basic expenses outstripped what they earned, thus plunging them into perpetual debt. This last case earned a conviction in 2007.

What struck me as I toured the Museum was that agricultural slavery never ended in Florida. I made a mental timeline. Chattel slavery was legal until 1865. After the Civil War, the courts engaged in a convict-lease system, in which primarily African American men were arrested on vagrancy charges in order to lease them out to farms and mines under horrendous working conditions. In Sarasota and many areas of Florida, there was a turpentine industry until around 1950, which was only possible due to the almost-free labor provided by debt bondage. With the advent of the railroad and refrigeration in the 1920s, Florida growers expanded citrus, sugarcane, and winter vegetable production in Florida. These large-scale operations required a migrant workforce at labor-intensive harvest time. The growers relied on the poorest of the poor and kept them working via debt bondage. I was educated to believe that we had outlawed slavery in the United States in 1865. Then I learned that forms of forced labor continued in the South, until World War II. But, I believe that in Florida, slavery has persisted for nigh on 400 years.

So that's the bad news. But there is good news. Jordan Buckley, from the Interfaith Action Center of Southwest Florida, informed me of the impressive progress made by the Coalition of Immokalee Workers. As a result of its fifteen year fight against terrible working conditions, the Florida Tomato Growers Exchange, which accounts for 90 percent of the state's tomato farms, adopted a new Code of Conduct in 2010. This Code ensures that workers will be treated fairly. In addition to paying workers an extra penny-per-pound, farm employers must use time clocks, provide shade, and resolve worker complaints.
To put this in perspective, a group of very poor and disenfranchised Immokalee farm workers have brought about concessions from large multi-million dollar corporations! These include McDonalds, Whole Foods Market, Trader Joe's, Burger King, and Taco Bell. Jordan Buckley describes this situation in more detail below.
Unfortunately, Publix, the largest private employer in Florida, has refused to pledge to purchase produce only from growers who are committed to the Fair Food Code of Conduct. In the afternoon, a large crowd marched from one Sarasota Publix to another. Many local religious leaders participated. 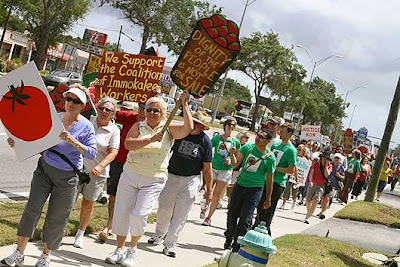