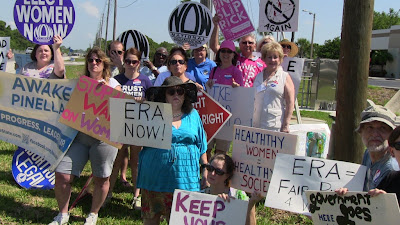 One angry woman backed by thousands of angry women. That's what it took to make a massive stand against the huge amount of legislation aimed at women this past year. Karen Teegarden, that one angry woman, wrote about her experience starting just two months ago -

I must begin this post by thanking Desiree Jordan. During a venting session on the phone late last Saturday night, we both could not believe that someone hadn’t organized a march for our voices to be heard. The legislation and rhetoric against women’s rights was multiplying at such a fast rate and we were angry. Saying goodbye, Desi said we should just do it. Of course, how many times have we said things like that only to go on with our daily tasks?

Something changed in me that night. I hung up the phone and for the first time ever, created a Facebook group. Organizing Against The War On Women was intended to share with my friends in hopes that we might be able to get some kind of event going.

One week later, we have over 10,000 passionate members, some with amazing experience and some complete novices, united in a common cause to regain our voices and fight the forces trying to take us back decades.

I now realize we have tapped into something much larger than our events on April 28th.

As if preparing ammunition for these rallies, Florida Governor Rick Scott used a line-item veto to cut funds for Florida's rape crisis centers. Not only did his veto occur during Sexual Assault Awareness Month, but it came just a week and a half prior to the rallies.
The power of social media cannot be overstated. From the seed of a Facebook group sprouted a protest march in every state capitol in the nation (except Delaware ??). Some states had more than one, so that women wouldn't have to travel so far. I found a rally in St. Petersburg, Florida put on by Awake Pinellas. Women and men came with signs supporting the Equal Rights Amendment, decrying attacks on reproductive health, the ever-resilient Pink Slip Rick, and more. Some here said the War-on-Women is a distraction to move the media discourse away from economic issues, away from Wall Street, away from the wars we are fighting overseas. Another felt that corporate America opposes the Equal Rights Amendment, because paying employees more would hurt their bottom line. And most couldn't believe that anyone would try to reopen the settled issues of women's rights. Everyone had something to say - some with more colorful language than others!
Today, thousands of people across the US rallied to express outrage at recent attacks on women's rights. Even if you didn't get to go, you can still sign this petition.
Sources: Unite Against The War on Women, Governor Rick Scott Vetoes Funds For Rape Crisis Centers During Sexual Assault Awareness Month, Ratify ERA Florida, Vote NO on Initialive 6
at Saturday, April 28, 2012