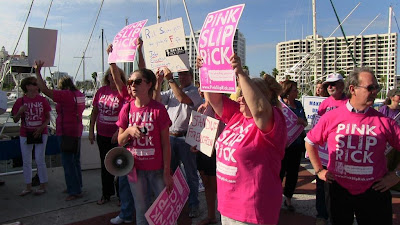 Florida's Governor Rick Scott came into office in 2011 with the wave of Tea Party politicians. He spent $73 million of his own money to get elected. At the time, even with that amount of personal campaign cash, I was amazed that he got elected. Back in 1997, he had been forced out of his own company, Columbia/HCA, by his own board of directors during a huge health care fraud scandal, a scandal that resulted in a $1.7 billion settlement. He ran on an austerity platform - large budget cuts, government workforce reductions, and corporate tax cuts. Within several months of being elected, afer doing just what he said he would, his approval rating took a dizzying plunge downward.

Again, this leaves me puzzled. For example, did people really believe that huge cuts in the state's non-profit workforce would lead to more jobs? Given this backdrop, I am just as amazed about the public outcry in opposition to the Governor. Florida Watch Action has taken it upon themselves to confront Governor Scott, wherever he goes. They launched the "Pink Slip Rick" campaign that took off around the state. Today, their message resonated with Sarasotans, who came out to the Bayfront to protest Governor Scott's fundraising dinner. Amy Ritter speaks on behalf of Florida Watch Action with a spirited response. Awake Sarasota supporters came with signs speaking out against Governor Scott's assault on Florida's middle class. Sarasota teachers, who are feeling their jobs and pay on the chopping block, came out in force. Occupy Sarasota participants made a strong showing. And you know you are making a splash when there are counter-protesters. A group of Scott supporters were waving signs down by the Unconditional Surrender Statue. I approached the counter-protesters to see if any of them would like to share their opinions. I had been surprised a couple of weeks ago, when a counter-protester shared her analysis of the foreclosure crisis - and it wasn't so different from my own. But today, none of the counter-protesters consented to an interview. After seven rejections, I headed over to the main action, where plenty of folks had something to say!
at Thursday, April 05, 2012