On Saturday, police estimated that about 100,000 Spaniards turned out for street protests. On May 15 of last year hundreds of thousands of people angered by a grim economy and the political handling of the international financial crisis came out to demonstrate. They called themselves Los Indignados (The Indignant Movement). Such demonstrations spread across Spain and Europe as anti-austerity sentiment grew. A year ago, Los Indignados put up tents and occupied city centers across Spain for several weeks. Police eventually moved in and evicted them. Many credit Los Indignados as the model from which Occupy Wall Street grew.

On Saturday, tens of thousands protested in Madrid. In Barcelona, about 20,000 demonstrated in the street. My adventurous friend, Jill, from Sarasota captured some of the spirit of the anniversary protest in her Barcelona photos. 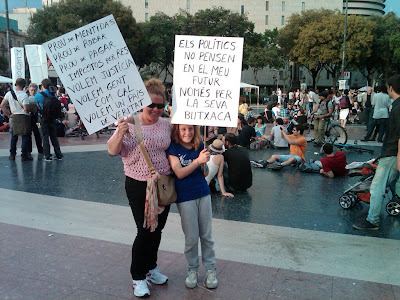 Occupy Sarasota has attracted many folks who subscribe to what most people would call conspiracy theories - the Illuminati, 911 was an inside job, chemtrails, etc. I did not realize just how popular these theories were, but I see there are Barcelonans who also believe in the chemtrails conspiracy. 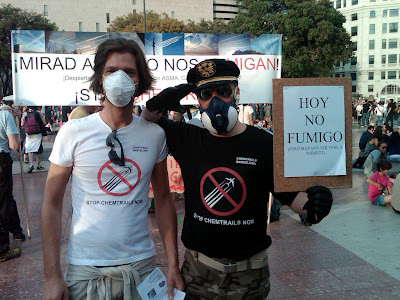 A wonderful sentiment:  You can cut all the flowers, but you will not stop the arrival of Spring. 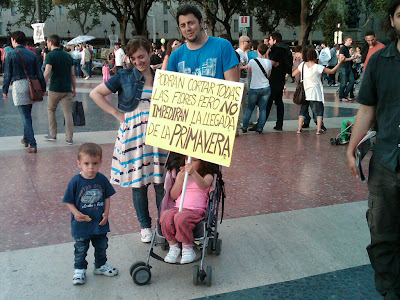 The austerity agenda was rejected in Germany yesterday. When voters in Greece and France had the chance, they voted against the parties backing austerity measures. There's a referendum scheduled for May 31 in Ireland that will let the entire country vote directly on the European Union's austerity plan. And two days ago, tens of thousands of demonstrators flooded into plazas across Spain. The Associated Press quotes Javier Colilla, a 27-year old university student protester in Spain, who stated that the government austerity cuts targeting health and education, but rescuing banks are wrong. He feels they need to find other places to cut. I suppose we in the United States might take some comfort from the fact that our own bailed-out bankers and their supporters in Washington are not the only out-of-touch world leaders. But I don't really feel any better.
at Monday, May 14, 2012