I had been looking for a local outlet to express solidarity with the Washington October action against the last ten years of war in the Middle East. Instead I found OccupyTampa. OccupyTampa claimed to be a non-organization organizing in solidarity with the OccupyWallStreet movement. Although we did not plan to stay overnight, Tom and I headed up to Tampa with a vague notion of supporting the anti-corporate sentiment that has been bubbling up in our country. This sentiment is fueled by massive bank bailouts, continuing home foreclosures, gross disparaties in income between those at the top and those at the bottom, and our politicians' inability to solve much of anything. This is what some of us looked like as we marched through downtown Tampa (note Tom on the far right). 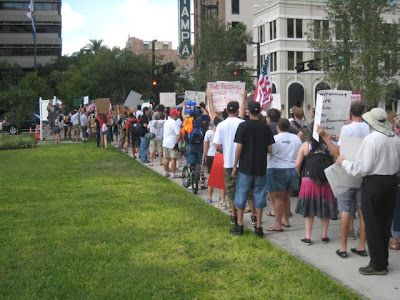 Many negative online commenters said we were mostly young hippies and unemployed, or "Quit Whining and Go Get A Job". But you can probably tell from just one picture that such descriptions don't capture our essence. We carried signs expressing a diversity of gripes. I think this is what grassroots looks like - an unfocused message. Since we didn't have a permit, we split up into smallish groups, walked in the crosswalks, and obeyed all traffic signals. And, there were a lot of us! Especially during a work day, on a Thursday !!

Florida is not a hotbed for activism of any sort. We are usually at the tail end of even retail revolutions, never mind political revolutions. So, I am amazed that OccupyTampa is happening. And at a time, when we are still formulating the message, sounding out sound-bites, and finding focus. My mind was rolling around as I drove home to Sarasota. I had never before been part of a people's mic (more about that tomorrow). I appreciate that non-violence is integral. And, I have no idea why so much animosity is directed at the Federal Reserve; I will research that and report back. At a time when I am starting to feel crisis-fatigue, when I watch/read mainstream news coverage, I like the idea that groups all across the country are coming together to look at where we wish to direct our care and attention. Looking at the multitude of ills that are overtaking us, but through the prism of corporatism, might provide profound and accessible insights. What really hit me on the way home was that the Occupy Movement is really protesting the very things that the Tea Party protested at its inception. At its core, people in both groups are unhappy with economic injustice. But since the Occupy Movement is not sponsored by the Koch Brothers and Fox News, it might be a force for the common good. The unfolding process, the opportunity for understanding, the as-of-yet unknown solutions, and the resulting community could be the impetus for the change we need. Here's hoping Occupy doesn't get co-opted.
at Thursday, October 06, 2011