I checked the list of supplies needed by Occupy Tampa. Despite our culture's embrace of electronics, they were requesting legal pads and pens. I had been looking for someone in need of pristine typing paper, graph paper, and legal pads that we had accumulated over the years. Finally, an interested recipient! They didn't want any more apples and bananas. Were they looking for more exotic fruit? Puzzlingly, there were no requests for sleeping bags or ponchos. I stocked up on legal pads and papayas and headed over to Tampa for a visit. Upon arrival in downtown Tampa, I saw some shade structures set up at Curtis Hixon Park. A small and friendly group has been camping out for five nights now. They started at about 15 strong and last night's count was up to 41. Jordan H comments on the current status of OccupyTampa.

They have put together a kitchen area and amassed a small supply of blankets, pads, sleeping bags, and folding chairs. 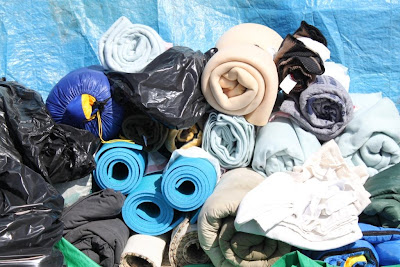 Although most folks bring their own sleeping gear, the participants had taken it upon themselves to stockpile extra gear for the homeless and for those that might come unprepared. Tampa is warm all year, but there are blankets -
I had been there about an hour, when a report came in from New York City that the Occupy Wall Street protesters had been ordered to clear Liberty Plaza by tomorrow morning at 7am. Ostensibly this was because the park needed to be cleaned. But since the New York City Police Commissioner had also said they would NOT be able to return with any sleeping bags, tarps, or personal items, this was clearly an eviction notice. This elicited a strong response of solidarity from the Tampa group.
Stephen G, a participant here in OccupyTampa, just returned from spending four days at OccupyWallStreet. He was impressed with a high level of organization there and looks forward to helping set that up in Tampa. He comments on the diversity he found at OccupyWallStreet -