A Tale of Two Occupied Cities

Two Occupied Cities have responded very differently to their protesters. Occupy Albany (New York) is camped out in a park across from the Capitol and City Hall. The park is composed of City land and State land. As reported by the Times Union, on Friday evening, with pressure from Governor Cuomo, Albany's Mayor Jennings directed the Albany police chief to enforce Albany's curfew law on the City land. For his part, the Albany police chief issued this memo to his officers, "At this time I have no intention of assigning officers to monitor, watch, videotape or influence any behavior that is conducted by our citizens peacefully demonstrating in Academy Park." A State Police Civil Disturbance unit had also been called to the scene. Between the two enforcement units, NO arrests were made, despite political pressure from above. Occupy Oakland (California) had been camped out in front of City Hall for about two weeks. According to a Mercury News report, several City officials had originally supported the protest and even joined in. This morning, hundreds of police decked out in riot gear, came to dismantle the peaceful camp. Estimates vary quite a bit, but apparently, when the police arrived, there were more police officers than protesters. The police used tear gas and bean bag bullets against the crowd. Some from the crowd threw things at the police. There will probably be a difference of opinion on who did what first. 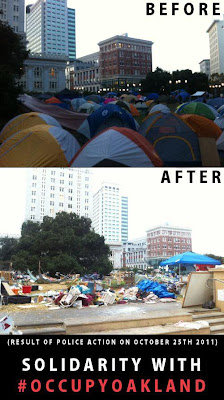 The police let many protesters out of the area, and then arrested about eight-five people. Some were held on as much as $7500 bail. Overall, this police action was a show of force. How will this play out over the next few days? Here's my prediction. The Oakland police have just invited an influx of Occupiers - new and returning - as well as a lot more interest from the media. The Albany police will have relatively little media coverage as well as a much more cooperative and productive relationship with the protesters. J.P. Dobrin of San Francisco took some beautiful photos of the dismantling of Occupy Oakland.
at Tuesday, October 25, 2011