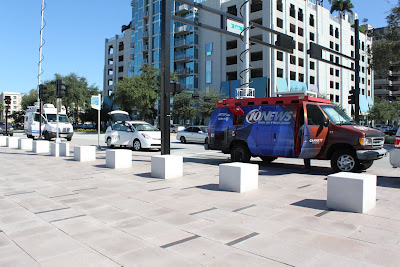 Nick W had followed the police around trying to get arrested, but with no success. Nick demonstrated one of his unsuccessful poses. 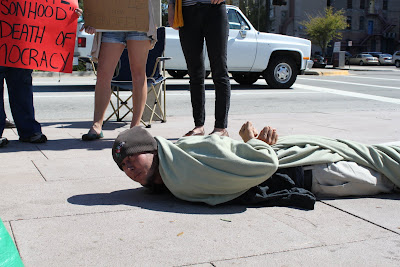 The video footage of the arrests is not particularly interesting, but it does show that the Occupiers are documenting everything. The Tampa police had clearly told the Occupiers that they were not allowed to sleep between 6 a.m. and 10 p.m. After interactions with Tampa City Council members yesterday, at least some of the protesters were convinced that they would not be breaking the law by sleeping on the sidewalk during the day. On my way home from Tampa, I heard John Dingfelder, a lawyer with the ACLU, on radio station WMNF. His opinion was that Tampa would not be able to enforce their ordinance in this manner. Perhaps the City of Tampa's legal team had their doubts as well, since it took a week and a half to make the first arrest. Short term, the logistics of getting arrested and avoiding arrest will likely continue to preoccupy most Occupy Tampa protesters.
at Friday, October 21, 2011